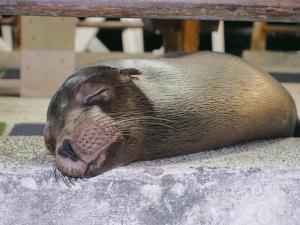 Swimming off the beach with turtles and sea lion pups, hanging out with 100 year old land tortoises or dodging penguin missiles shooting through the water; the Galàpagos is a wild aquarium and one of the most special places in the world, but for many travellers on a budget it is believed to be simply too expensive to visit.

But there is good news, the Galàpagos can be experienced in all its glory on a smallish budget! I visited for two weeks and could have spent less than $350 a week – if I wasn’t a diver, plus airfares ($250-400 return). Read more. 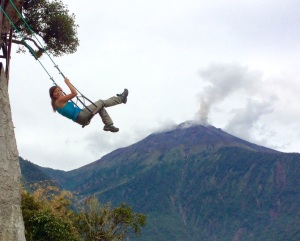 Swing into the end of the world as Tungurahua erupts

Adventure Sports in the Shadow of an Erupting Volcano, Baños

Tungurahua Volcano erupted this morning spewing plumes of gas, above the stunning town of Baños in Ecuador. I had a chance to get up close, visiting Casa del Arbol (Tree House) near the base of Tungurahua – also known by the fitting name of Swing at the End of the World.

Despite the threat of the end of the world coming from above, life went on as normal in Baños. Instead of evacuating the town, my guide took me into a valley that was perfectly located for a pyroclastic lava flow should the eruption have escalated, and I went flying through the jungle and across the canyon on zip lines. The erupting volcano added an edge to the adrenalin experience.  Read More. 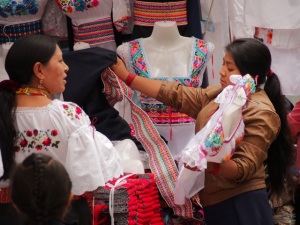 Otavalo has one of South America’s largest craft markets

Gorgeous Otavalo is a town most travellers visit for one of South America’s largest artisans craft markets, but it has so much more to offer. I stayed here for two weeks to study Spanish and loved getting to know this beautiful town and its people.

Set in a valley surrounded by mountains and volcanos, this pretty village has a small colonial centre and a big heart. Read More. 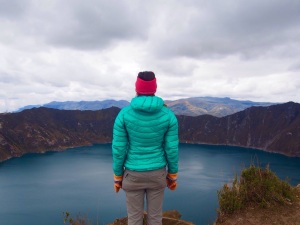 Standing on the edge of an aqua-coloured crater lake or a freezing glacier sheet can make the heart skip a beat – especially if you have just hiked up a mountain to 5000m.

Quilotoa and Cotopaxi offer some of the most stunning hiking experiences in Ecuador which are accessible to the experienced and beginner hiker. At the moment, Cotopaxi is on alert and the park is closed after the volcano began erupting for the first time in 70 years. Read more. 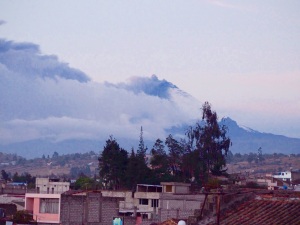 I stand on a rooftop in Latacunga, Ecuador, this morning watching as dark smoke billows from the summit of Cotopaxi, a great cloud of ash extends west over the town of Santa Rita where I stayed two days ago.

A massive slab of white ice is visible, the glacier – the white Grim Reaper. It is that ice sheet that partially melted from the hot rocks and gas during the last eruption more than 100 years ago and delivered a cataclysmic mudflow that wiped out the town where I slept last night. Read More,