7 ways to most likely die when travelling 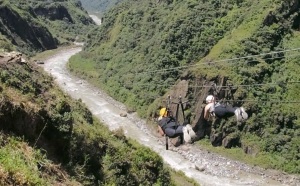 By and large, my travelling experience has been wonderful but here are a few experiences of mine and those of friends that highlight some of the dangers of travelling.

Bus Travel
Travelling by bus has to be the most frightening experience in Latin America. Many times I have resorted to prayer as the driver reaches impossible speeds on winding mountain roads in buses that are barely roadworthy. People and luggage have been thrown from side to side and sick bags reached for.

Overtaking on blind corners is encouraged and two metres between vehicles is considered sufficient space when travelling at 100km (60m/h) an hour. All you can do is hold on tight.

But one of my friends, I think Alison, had the unfortunate experience of waking up to a falling sensation as her bus crashed. Fortunately the drop was only a few metres but enough for some people to be injured 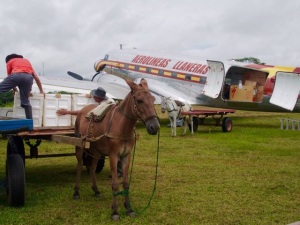 Plane Crash
Perhaps one of the most frightening stories goes to Aussie travellers Ainslie who, after leaving me on the Galàpagos, took a flight from Quito to Lima when a massive bang followed by smoke alerted everyone to engine failure. The plane made an emergency landing and all on board were fine. But it highlights the dubious safety record of many Latin American airlines.

Despite Ainslie’s experience statistics suggest plane travel is very safe. I have taken several flights in tiny planes and took comfort in knowing that although small planes are more likely to fall out of the sky, you are more likely to survive a crash in a small plane than a big one. Such a huge comfort! 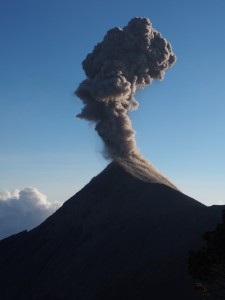 Volcanic Eruption
I come from countries without any active volcanoes and few earthquakes so of course I gravitate towards the awe inspiring power of volcanoes. Nothing is more exciting than sitting on top of a mountain and watching a lava eruption.

And so I write this blog 20 kilometres from Ecuador’s most dangerous volcano. After being largely dormant for the past 130 years, Cotopaxi roared into life last week to deliver its biggest eruption since 1877. The last eruption resulted in pyroclastic rock and gas flows that melted the ice on its peak and flooded the provincial capital of Latacunga in mud. It was the third time since colonial settlement that the provincial capital had been destroy by Cotopaxi.

While volcanoes are extreme in power, your chance of being on a mountain when one erupts and being killed is pretty slim. Famous last words.

Police and Drugs
Drugs are bad for you, yes, but in this part of the world, often police are worse. So when you mix the two it is a recipe for disaster.

A friend, Daniel, was out in the early hours of the morning in Cartagena when he and his mate were stopped by police who wanted to search them – which they were not permitted to do. While Daniel turned out his own pockets, a policeman put his hand in the other guy’s trousers, and pulled out a stash of cocaine. The police had planted it on him but several hours and $300 later the two travellers were released from custody. 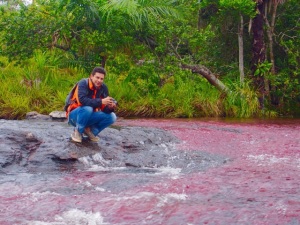 Javier was kidnapped by FARC guerrillas in 2008

Stupid Travel Decisions
Colombia is one of the safest countries to travel in and people are very friendly so it is easy to be lulled into a false sense of security. I was at that point when I decided to visit Caño Cristales which lay in the heart of FARC (political guerrilla group) controlled territory. I wanted to travel there via bus and boat. It sounded exciting and beautiful.

Fortunately I undertook a little research and decided it possibly wasn’t the best idea. Instead, I flew into the town which was under military control. While there, I met Javier, a mining environmental consultant who told me about his experience of being abducted by FARC. While he got off lightly as he was Colombian he said a group of Japanese engineers weren’t so lucky. He warned me “if you try to travel overland back to Bogota, you will be abducted.” 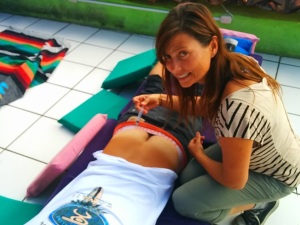 Injecting my brother, Reefe, with antibiotics

Getting sick
Forget dangerous buses and planes, if a traveller is most likely to die it will probably be from a tiny cut. My brother, Reefe, cut his foot surfing in Mexico and instead of it healing quickly, it became infected. Before long he was violently ill and on antibiotics.

Minor sores seem to quickly become infected in hot, humid climates here in Latin America. It is a good idea to keep injuries dry and clean until they heal. Head straight to the doctor if it becomes infected.

Sexually Transmitted Diseases
Backpackers are possibly responsible for the largest group importation of sexually transmitted infections (STIs) into their home countries than any other group. Sex is generally on the menu most nights and easy to come by. But in the chilled out and trusting heat of the moment, many people can forget the basics. Safe sex.

While dying from STIs is now rare, many of these diseases are with you for life. Remember, chances are if they are putting out for you, they have probably fooled around with dozens of people while travelling.

← Galàpagos on a Budget
Top Travel Apps and Websites →