The North Western Caribbean coast has enough to keep any traveller occupied for weeks. With a stunning beachside national park, jungle covered archaeology sites and colonial towns, there is something here for everyone.

I based myself in Santa Marta and explored the surrounding area including the Lost City and Tayrona National Park, along with the coffee town of Minca and beachside village of Palomino.

Lost City
For any adventure traveller, the Lost City is the jewel in the crown of Colombia. Reached, only by foot after two days of trekking through jungle and over mountains, valleys and rivers, this is as much about the journey as the destination. Read my blog about this amazing trek.

Tayrona National Park
Less than an hour’s bus ride from Santa Marta is the jungle covered beachside national park of Tayrona. Here you can take a well trodden, easy 1.5 hour path to the beautiful swimming beaches of Cabo and La Piscina. Along the way we passed several other beautiful beaches that are not safe to swim in due to strong rips. We started walking around 9am and the heat was intense despite most of the walking being under the jungle’s canopy.

We stayed in the island hammocks at Cabo which are literally hammocks on a raised platform on top of a rocky peninsula surrounded by water in the middle of the bay (visible in the feature photo). It was a stunning, if not slightly chilly sleeping experience. Beds are also available on the level above. 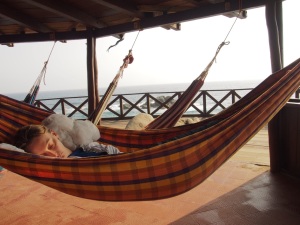 It is possible to reach Cabo via boat from Taganga for about COP45,000 one way.

The bus between Santa Marta and Tayrona National Park entrance is COP6,000

Santa Marta
This sprawling seaside city has pockets of beauty and provides an insight into a working Colombian Caribbean town. The selection of hostels here is immense. I stayed in the heart of the old city near the Parque de Los Novios which is surrounded by cool bars and cafes and the park itself comes alive in the evenings.

I also stayed in Taganga which is a quiet but pretty fishing village just 15 minutes from Santa Marta.

Accommodation: Hostel Jackie 25,000 for a dorm bed with a private fan, COP75,000/COP90,000 for privates without/with air conditioning. There is a pool and breakfast is included. Staff are very friendly and helpful.

Minca
About 40 minutes drive from Santa Marta is the sleepy coffee production town of Minca. Set in the hills, it offers easy walks to waterfalls, hikes to beautiful vistas and coffee tours. There are a couple of great hostels where you can relax and escape the noise and crowds of Santa Martha.

Hostels: Casa Elemento for unparalleled views and a giant hammock. It is a COP30,000 mototaxi fare from Minca town up the mountain to the hostel.

And Casa Loma  is located in the village.

Getting to Minca: A taxi to the edge of Santa Marta where you can collect a Mototaxi COP12,000 in total or it is a COP50,000 taxi ride from Santa Marta to Minca.

Palomino
The small seaside village of Palomino is swelling under the influx of tourists but it offers pretty beaches and jungle. Here you can go tubing down the Palomino River to the ocean. This is a great place to relax.

Hostel: The Dreamer Hostel which is on the beach. COP29,000

Getting there: Buses run every 30 minutes from Santa Marta via Tayrona National Park entrance.